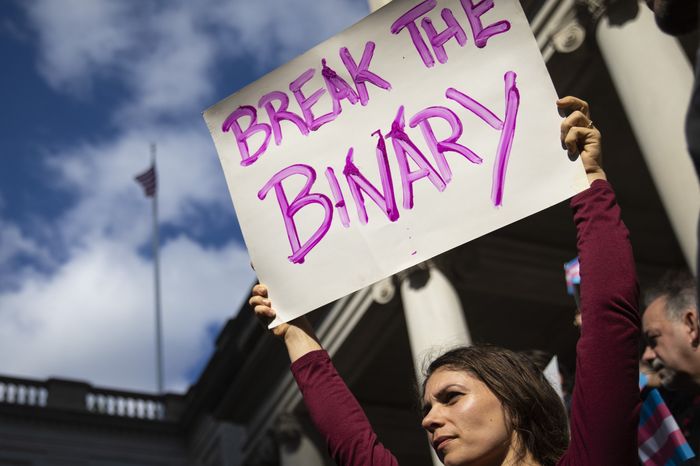 As people from all around the world are gathering this month in New York City for the United Nations’ annual Commission on the Status of Women, to focus on the theme of “achieving gender equality and empowerment of women and girls” in a variety of settings, I think it’s especially important that we consider the widely embraced flawed understanding of “gender equality” and how this dangerous idea in fact cheats women and girls.

I will focus on the body of my work over the past 20 years—focusing on the reproductive bodies of men and women.

Until recently, it was universally accepted that there are two sexes—male and female, and any deviations from the male/female binary were variations of maleness or femaleness. That’s the science. That’s human biology. And the two-sex distinction was based on our chromosomes (XX and XY) and our reproductive capacity. Male means you have a penis, testicles, and produce sperm. Female means you have a vagina, ovaries, uterus, and produce eggs. These two sexes together have the capacity to reproduce. Any inability to reproduce doesn’t take away your maleness or femaleness—an inability to reproduce is what is known as infertility.

But now we have been arbitrarily told, almost overnight, that the very definitions of words such as “man” and “woman” aren’t at all linked to sex but rather to an individual’s subjective sense of gender. Womanhood has been reduced to a feeling and a set of sex-role stereotypes. The news flash is that men can be women and women can be men. And in this global rebrand, actual women are being erased, harmed, and exploited. We are no longer women and mothers, but we are “birthing people,” since men, we are told, can now have babies. Breastfeeding has been swapped out with “chestfeeding” to accommodate “men having babies,” although the lifetime risk of a woman being diagnosed with breast cancer is 1 in 8, but for men, it’s 1 in 833.

Midwives report that in doing their job, they are banned from using words like “women” and “mother” when helping women give birth to become mothers.

One question was raised in a conference I attended where an attendee asked a speaker to talk about “moving beyond the male/female binary” because men who are pretending to be women are uncomfortable talking about their sperm. The speaker agreed that we need to move beyond speaking about male sperm and female eggs and then commented that a “trans female” patient who had banked his sperm before affirmation surgeries was uncomfortable with the word, because sperm is such a gendered word.

But here’s the thing: We’re women until we aren’t. The powers that be have determined that when it’s convenient to use the term “woman” or “female” or “man” or “male,” we can make this biological distinction. Until it becomes politically or ideologically driven toerase and cheat, exploit, and marginalize women. Big Pharma and its proponents first invest millions in peddling the notion that biological sex is arbitrary or irrelevant and then rake in millions by targeting people specifically by sex.

Merck is enrolling women in a clinical trial for a new treatment protocol for cervical cancer. In order to be eligible to participate in this trial, you must have cervical cancer, be over 18 years, and be a woman. This study began in 2020 and is scheduled to end in 2024.

UC–San Diego has an active clinical trial for a new treatment protocol for advanced cervical and vaginal cancer, and you must be a female to be eligible.

Conversely, Pfizer has a clinical trial investigating a new drug treatment for prostate cancer—which their own website states is the No. 2 cancer affecting American men, after skin cancer.

Turning toward fertility medicine and treatments involving egg and sperm sellers (not donors, as these people are most often paid) and surrogacy, the advertising and marketing clearly are sex-based. Fertility tycoons don’t seem to have trouble discerning which people to target for the exploitation of their bodies.

One agency that promotes their egg “donation” business requires prospective donors to have regular monthly menstrual cycles and have both ovaries.

Another agency lists their requirements for potential sperm sellers this way: “Let’s begin with the basics. First, and obviously, you must be male.” Then they go on to describe how a semen sample will be professionally analyzed for sperm count, motility (how well your sperm move), and morphology, which is an indicator of the overall health of the sperm.

Surrogacy requirements of most agencies state the woman must have a healthy reproductive history, have given birth to at least one child whom they are raising, and have had all births occurring at 36 weeks gestation or later (unless a multiple pregnancy) without complications.

So, good proper medicine and medical breakthroughs and advances require that we are male and female all the time, not just when it is politically motivated for an agenda. These sorts of ideas that deny maleness and femaleness are not only a detriment to our health and well-being, but also to future generations yet to be born.

Let’s forget using pronouns and get back to the basics of science and human biology.

As first published in The Epoch Times