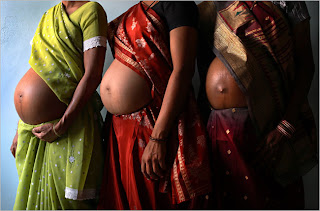 It’s a growing concern. Find the country with open and friendly borders where you can get the services you need or want. Shop around for the best affordable prices. Grab a cheap flight and hop on a plane, tag on a vacation, and viola you get the child of your dreams! Many clinics around the world even promote themselves as conveniently located to major airports. Like in:

Surrogacy is exploding in India.
Canadian girls come to America to sell their eggs since it is banned in their country.
Sex-selection is readily available in the U.S. for those wanting to order the birth of children by the “right” sex.

One Canadian paper writes this:

“Inside the sleek offices of Seattle Reproductive Medicine in Washington state, Dr. Paul Lin and other physicians often see Canadian couples eager to buy what isn’t for sale in their own country: pregnancy with a donor egg.”

Surrogacy Abroad Inc. advertises this website which boasts this:

“We are aimed at providing a right surrogate for you. India has been a target destination for childless couples. It is estimated that surrogacy treatment brings more than $450 million a year into India.”

Not withstanding all the health risks involved with IVF, the exploitation of poor countries and poor women, by rich countries and rich people, what does this say about our world? I say we are “Trading on the Female Body“. And that this is the newest form of human trafficking.

What do you think?

Should Cosmetic Surgery be Outlawed?

Calla Papademas Tells Her Story On Being An Egg Donor