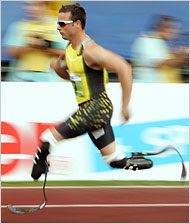 Leon Kass and others have often wondered if the transhumanist agenda takes off, will we need a new category of Olympic competition?

This story in the NYT today will further this conversation.

“Track and field’s world governing body ruled on Monday that Oscar Pistorius, a double-amputee sprinter from South Africa, is not be eligible to compete in Olympic qualifying events. The International Association of Athletics Federations explained in a statement that, after an independent scientific study, it deemed Pistorius’s state-of-the-art carbon fiber prosthetics “should be considered as technical aids which give him an advantage over other athletes not using them.”

Our Not So Human Future