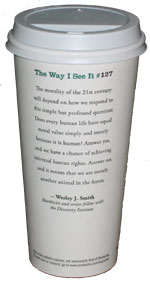 For you coffee buffs out there, you may have heard that Starbucks is running a campaign called, “The Way I See It“. Starbucks states they have “always supported a good healthy discussion” and in the tradition of coffee houses, to spark good conversations, they have enlisted a “collection of thoughts, opinions and expressions provided by notable figures”, which they print on their coffee cups to encourage good conversations amongst their customers.

The quotes you see on Starbucks cups have sparked conversation as well as controversy. Notable figures such as comedian, Steve Martin, musician, LeAnn Rimes, Nobel laureate, Dr. David Baltimore and author, Carl Hiaasen, have penned their worldview quotes to initiate good conversation while sipping coffee. And author, Armistead Maupin’s quote was so controversial it caused Baylor University to pull 500 cups from their campus Starbucks.

A few weeks ago, CBC’s own Special Consultant, Wesley J. Smith had his quote unveiled as coffee cup quote #127 was released. His quote reads:

The morality of the 21st century will depend on how we respond to this simple but profound question: Does every human life have equal moral value simply and merely because it is human? Answer yes, and we have a chance of achieving universal human rights. Answer no, and it means that we are merely another animal in the forest.

Wesley’s quote sums up the mission of the CBC as we seek in all of our activities, to defend human dignity in the 21 st century. We at the CBC realize just how profound this question is and how utterly important it is that we work hard to help those who would answer “no” to see how deadly that answer is to the future of the human race. If history teaches us anything, it is how prone we are to exclude members from the human family and deny them their universal human rights. We see throughout time we have always made special categories for people, which could serve only as our tool to deny their status as fellow human beings, deserving of equal rights and protections under the law.

The basis for universal human rights can not be rooted in being smart, wealthy, able bodied, talented or possessing a particular color of skin or sex. Nothing else, except simply because we are human, will keep us from being merely another animal in the forest.

The way I see it, being human in and of itself are the only grounds for dignity.

100,000 Dutch Sign Petitions to Permit Assisted Suicide of the Elderly