Several months back, a donor-conceived friend of mine challenged me to undergo DNA testing as part of my ongoing advocacy in the space of anonymous egg and sperm donation. It was a sort of ‘walk a mile in my shoes’ challenge; see what it’s like to go and search for your family. I balked at the cost of the testing (although the pricing has really come down) so my friend even footed the bill.

In about a weeks’ time, my home test arrived. I opened up the package in my kitchen and followed the step-by-step instructions. Swab the inside of my cheeks. Carefully put the swaps back in the vials, label them, sign everything and drop the package right back in the mail. My children were curious and wanted to do the test too. I told them they could do it if they bought their own kits. Their curiosity ended then and there.

Then I waited. And wondered. I wondered what I would find out about my family tree. Would there be anyone famous I could now claim as kin? My maiden name is Chenoweth, so I was sure I would find out that I am related to Kristin Chenoweth! I had grown up being told that Don Knotts (you know, Barney Fife on the Andy Griffith show) was a distant cousin. I wondered if I would uncover any ugly family secrets I might not want exposed. I wondered if people had been looking for me, realizing this is a two-way street and that I not only had the ability to find others, but they could find me too.

Maybe I wouldn’t want them to find me.

Soon the day came when my testing was complete and the details were posted on the Family Tree website. I first contacted the benefactor of my testing kit and got filled in on how to navigate the website, what to look for, and how to make contact with those who came up as ‘connections.’ Then I began the daunting task of slogging through pages and pages of names, names that were listed along with a possibility of related kinship: distant cousin, 3rd-5th cousin. These were the names of total strangers who shared geographical connections with my relatives, and some even the same surnames.

I began emailing a few, asking how we might be connected. And I answered emails from others who reached out to me, saying things like:

I received your match request and am wondering how we may be connected.
I’m Chenoweth and Neal on my father’s side and Baker and McKittrick on my
mother’s side.

I’m still in the process of discovering my full Family Tree, but I have come to an even greater appreciation for what those in the adoption community and in the donor-conceived population must struggle with every day in their search for family and identity, and the meaning these can bring their lives. 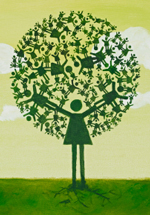 I have the much taken for granted luxury of knowing who my mother and father are, and of knowing my siblings and my extended family.

I can see how, with modern DNA testing, one could spend hours, weeks, months, and even years combing through endless pages of data, looking for that missing link to biological ties. Each day, with more people being added to the DNA databanks, this search could be never ending—and quite exhausting.

I can’t even begin to imagine the feelings they experience with each passing day, nor the toll this must take on a donor-conceived person’s life and family. What it must feel like when you’ve found a match—terribly complicated feelings like, should I contact this person? Will they respond to my inquiry or ignore me? And then that long dreamed about meeting day. What will they be like? Will I look like them? Will we like each other? I just can’t imagine living each day with so much a part of me being a mystery.

So we here at CBC will continue to advocate for these people and their right to know these most basic things about their own lives.

You make our work possible

This article originally appeared at New Feminism. Used by permission.

Jennifer Lahl, CBC President
Jennifer Lahl is founder and president of The Center for Bioethics and Culture Network. Lahl couples her 25 years of experience as a pediatric critical care nurse, a hospital administrator, and a senior-level nursing manager with a deep passion to speak for those who have no voice. Lahl’s writings have appeared in various publications including Cambridge University Press, the San Francisco Chronicle, the Dallas Morning News, and the American Journal of Bioethics. As a field expert, she is routinely interviewed on radio and television including ABC, CBS, PBS, and NPR. She is also called upon to speak alongside lawmakers and members of the scientific community, even being invited to speak to members of the European Parliament in Brussels to address issues of egg trafficking; she has three times addressed the United Nations during the Commission on the Status of Women on egg and womb trafficking.

Why Just Banking Cord Blood Is Not Enough

A Clone by Any Other Name is still Human