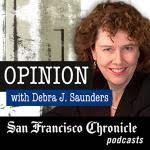 Well, this was a nice surprise. On Tuesday the 31st, my wife, San Francisco Chronicle syndicated columnist, Debra J. Saunders, and yours truly will be the guest hosts on the Dennis Miller’s syndicated radio program. This is a real treat. Debra is a regular guest on Miller and I also have been on the show. How nice the producer thought of us.

This will be a nostalgic experience. From the late 1980s until moving to San Francisco in 1992, I was the 4th talk show host on a three talk show host station (KGIL 1260 AM in Los Angeles), where I was privileged to interview the top newsmakers and cultural icons of the era. It was one of the greatest gigs I ever had — most notably for my future happiness, because one fateful day, I interviewed a certain up and coming Los Angeles Daily News columnist named Debra J. Saunders. We’ve been married now for more than twenty years.

I did talk radio when the guest was the point, not the host. I think Miller combines the best of both approaches, which is why his is one of my favorite talk shows on the air.

It’s been more than twenty years since I have hosted instead of guested. Should be fun. You can listen live at 7:00 a.m. to 10:00 a.m. Pacific Time by linking to Dennis Miller radio. To check for stations in your area, go here.

How to Drive the Dying to Assisted Suicide

The “Chaos” Sired by Sperm Donation

CBC on the Road: BEINGS15 Summit