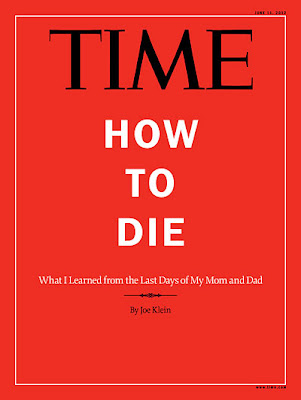 The political left just does not get the concept of “death panels,” and/or intentionally conflate it with ethical approaches to refusing treatment in order to confuse people for political purposes. This is clear from a Time summary of Joe Klein’s cover story about being the medical decision maker for his parents when they were dying of dementia. From the Time summary:

In this week’s TIME cover story, “The Long Goodbye” (available to subscribers here), journalist Joe Klein writes about managing the care of his ailing parents, both of whom suffered from dementia, until their deaths last winter eight weeks apart. He spent “five months as a death panel for both my mother and my father,” Klein writes.

No! A “death panel” is when someone like Klein wants treatment for his family member but is thwarted from obtaining it because of rules passed by strangers in a centralized cost/benefit rationing board. Or, it could be a hospital bioethics committee imposing “Futile Care Theory” treatment withdrawals that are wanted by patient or family, based on quality of life or cost saving.

Family members making treatment decisions as surrogates are precisely the opposite. Indeed, telling family members who might refuse treatment that they are akin to death panels, is not only factually wrong, it is emotionally cruel, and could lead to faulty choices for fear of doing wrong.

If Klein doesn’t know better than that, he has no business writing Time cover stories about how we die, much less anything else.