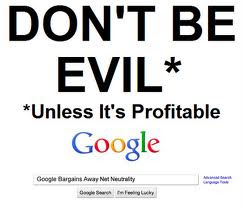 Google’s business slogan was once, “Don’t be evil,” which the company dropped in 2009. Perhaps they should have kept it. Now, Google is paying a $500 million fine for knowingly allowing on-line pharmacies that illegally sell drugs without a prescription to advertise on the companies engines. From the NYT story:

The government announced Wednesday that Google will pay $500 million to settle government charges that it has shown illegal ads for online Canadian pharmacies in the United States. The fine, which the Justice Department said is one of the largest such penalties ever, covers revenue that Google earned from the illegal advertisers and revenue that the Canadian pharmacies received from United States customers. As part of the settlement, Google acknowledged that it improperly aided Canadian pharmacies that operate illegally by failing to require a prescription or selling counterfeit drugs in advertising through its AdWords program.

In the internet age, we need people at all strata to act with honor and restraint. This is especially true with regard to medications, which can be dangerous, or which can kill if improperly provided. Google failed in this instance. Perhaps this sizable fine will promote greater care across the entire sector. Good for the DOJ for going after a big supporter of the Obama Administration.

The Gross Advertisement Deception of #BigFertility

The “Chaos” Sired by Sperm Donation