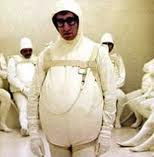 The New York Times has an interesting report today that male contraceptives in human trials appear to work, generally by reducing sperm output to the point of infertility. From the story:

Male contraceptives are attracting growing interest from scientists, who believe they hold promise for being safe, effective and, also important, reversible. “We have a number of irons in the fire,” said Diana L. Blithe, program director for contraceptive development for the National Institute of Child Health and Human Development. “I think men actually do want to do this.”

While male contraception has been studied before, no method met the stringent safety and effectiveness criteria that female methods do. It was also unclear whether men would use them. Now, scientific advances are producing approaches that could pass muster. Prompted by women’s organizations, global health groups and surveys indicating that men are receptive, federal agencies are financing research . . .

The most studied approach in the United States uses testosterone and progestin hormones, which send the body signals to stop producing sperm. While effective and safe for most men, they have not worked for everyone, and questions about side effects remain. So scientists are also testing other ways of interrupting sperm production, maturation or mobility.

The good news is that safe and effective male contraceptives would have far fewer ethical controversies associated with them than most current non-barrier female methods:

But that doesn’t mean there would not be a few rough patches to iron out. Some — such as the Catholic Church — would still have religious objections to male birth control as part of their general dogma against all forms of artificial contraception. The issue of insurance coverage for male contraception could thus become part of a broader discussion about whether the government can, or should, force such religious groups to cover birth control in their health insurance plans for empl0yees (or plans generally, as recently recommended to become part of Obamacare).

Of course, the question remains: Would men take drugs that interfered with their fertility? Given the general male squeamishness around their reproductive functions, I think there might be significant buyers’ resistance.

How Did We Get Here?