Callahan’s Conundrum: Should We Slow Federal Funding of Research to Control Health Costs? 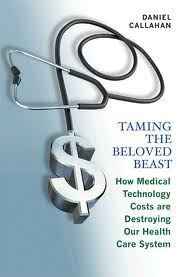 Bioethics founding father, Daniel Callahan, has long called for a reevaluation of our open-ended approach to medical innovation — a field that he worries has developed a “research imperative” — as a way to prevent a total blowout of health care costs. The idea in a very simplified nutshell is this: New innovations often tend to be very expensive because they drive up costs as they increase life spans, thereby often making health care increasingly less affordable and access to treatment less equitable. He would like that changed, which in some cases, would mean reducing research or leaving some areas of advance unexplored (at least with the public dime).

I used to think he was dead wrong. But now I wonder. I thought of Callahan as I read a fascinating Wall Street Journal story of why former VP Dick Cheney is still alive despite five heart attacks and a possibly genetic predisposition to a defective ticker. Cheney tells of being 14 and finding his grandfather having a heart attack. The man died because there was little in the 1950s that could be done in such cases But the grandson has survived repeated problems, several of which that would have killed his grandfather. And it is all due to expensive-to-invent-and-apply medical technology. From “The Story of Dick Cheney’s Heart:”

The most tangible evidence is on Mr. Cheney’s person, what he calls “the gear.” He is wearing a custom wool vest that holds a small computer near his abdomen and on either side two battery packs, about the size of video tapes. “They’re good for about 10 hours,” he says. “Put these in this morning.” The gear, connected to his chest via an insulated cable, powers something known as a left ventricular assist device, or LVAD, a turbine implanted near his heart’s major chamber that propels blood into his aorta and circulates it throughout his body.

The technology was first developed as a temporary measure for people awaiting heart transplants. Now, patients are able to be helped for the longer term, and innovations continue. Which brings up the economic issue:

Most economists agree that the spread of such technological change accounts for most of the climb in U.S. health-care costs — and if it has bought a lot in extending and improving lives, much of it has been financed on the taxpayer’s nickel. Heart disease accounts for about a third of what Medicare spends merely on hospitals, not counting drugs or other charges. One larger question now is whether entitlements can be restrained without retarding future health-care innovation, which usually occurs at the margins and compounds over time.

“I don’t think that I know enough to say, well, here’s the plan. It’s not my specialty. I’m more a happy customer,” Mr. Cheney cautions. “We’ve got a system that provides for the kind of research and innovation that has provided these tremendous capabilities. That automatically raises questions about how we deliver to everybody who needs it. . . .But I don’t think there’s any way not to have that debate about how much we’re going to spend on health care. We’ve got big budget problems, big national debt problems. . . . In finding our way forward, we’ve got to be able to find ways to deliver the quality care that everyone expects and that we’re capable of providing to the maximum number of people.”

Of course, if we are only looking at the money angle, medical innovation also helps the economy by creating wealth, jobs, and ancillary products and innovations that create jobs and wealth, etc.

That brings us back to Callahan’s conundrum (let’s call it). Do we keep pouring billions of public money into research that has the potential to extend lives and improve outcomes, but often at an accelerating increase in costs — while at the same time we slash current treatment availability to patients and compensation levels to hospitals and providers (to use a term I don’t like)? It’s an awful point to consider.

But if it ever comes to really having to choose between full public support of research and full funding of current care — we’re not there yet — I think it would be most ethical to reduce public funding of research before cutting access to existing health care modalities. That’s known as triage, and it sometimes applies to policy as well as emergency medical circumstances.

Julia: My Experience as a Surrogate