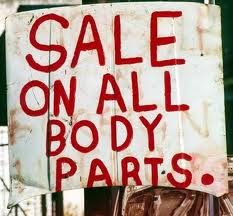 Are you kidding me? China murders its condemned and religious prisoners — as in Falun Gong — for their organs, which are then sold for tens of thousands of dollars to rich line jumpers from the West. You can get a liver in a month in China — for the right price. It is an insidious and dirty industry — both on the buying and selling side, as in the book Larry’s Kidney and “The American Vampire” — while the average Chinese citizen needing a transplant has little hope, since the usual donation system is generally non operative.

So now China wants to increase the supply of non murder-and-purchase organs by offering financial incentives for organ “donation.” From the Reuters story:

State news agency Xinhua cited Vice Health Minister Huang Jiefu as telling a local newspaper that the governments should “cut back medical costs for donors during their hospital stay and their funeral expenses. Other financial compensation could also be considered, such as tax rebates, medical insurance or tuition waivers for donors’ family members,” Xinhua quoted Huang as saying. By the end of this year, Chinese people will also be given the option of registering as organ donors when they apply for driving licenses, so there will be a record of donors in case the driver dies, Huang said.”The move is to streamline the donor registration system so as to expand the pool of organs available for transplant surgeries,” he added, though nobody will be compelled to register as a potential donor.

Unless you’re a political prisoner. Then you have no choice in the matter, and your family gets none of the money. Adding insult to injury, they might even have to pay for the bullet that was shot through your brain.

Out of the country

Is it fact or fiction?