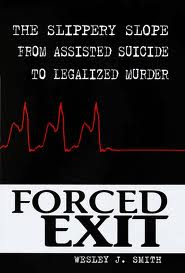 I have warned and warned that legalizing assisted suicide leads directly to permitting active euthanasia, as I once put it, like the left leg follows the right, while walking. And now, in Switzerland, a court has taken the poisonous leap. From the story:

A regional criminal court in Boudry ruled that the doctor had no choice when she took the final step to end the life of a terminally ill patient. Direct active euthanasia is illegal in Switzerland but assisted suicide and passive euthanasia (mercy killing) is not. In this case, the medic had started a lethal drip for a patient who was suffering from an incurable degenerative condition. As the patient – who had expressed a wish to die – was not able to perform the act herself, the doctor relied on a movement of the patient’s foot as a signal. The court ruled that as there was no doubt about the patient’s wishes, the doctor in this case had a medical and moral duty to break the law.

I Sold My Eggs and Paid With My Health