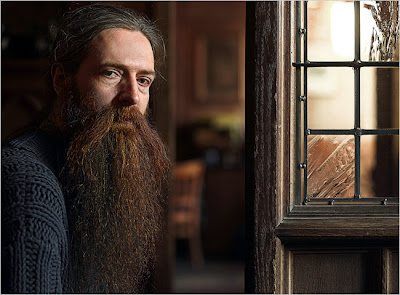 When I heard immortality researcher Aubrey de Gray make the hubristic claim that funding his work to end human death was more important than funding health care for destitute Africa, and indeed, that failing to do so was equivalent to terrorism (about which I wrote here), he lost me as someone to admire, much less to follow. But his obsessive quest to defeat death continues to fascinate observers–perhaps because of his ZZ-Top looks and the hot gleam in his eye.

In any event the NYT Book Review reviewed a new book on the human immortality project yesterday that focuses on de Gray’s belief that we can reach immortality by “curing” aging (as he stated in the speech I attended), a quest about which the author–and reviewer, physician Abraham Verghese–apparently take a dim view. From the review of Long For This World: The Strange Science of Immortality, by Jonathan Weiner:

But as Weiner points out, there is a big problem with immortality. Traditionally, we have viewed our lives as unfolding in stages: Shakespeare’s seven ages of man capture our progression from infant to schoolboy to lover to soldier to justice to clown, ending finally in “second childishness and mere oblivion; sans teeth, sans eyes, sans taste, sans everything.” Immortality could wind up being a terrible stasis. “A huge part of the action and the drama in the seven ages comes from the sense of an ending, the knowledge that all these ages must have an end,” Weiner writes. We might live forever in a state of unending boredom. And the technology might benefit the wrong people: “If biologists could have done for the dictators of the 20th century what they can now do for roundworms and flies — double their life span — then Mao Zedong might still be alive.”

As a young physician caught up in the early years of the H.I.V. epidemic, I was struck by my patients’ will to live, even as their quality of life became miserable and when loved ones and caregivers would urge the patient to let go. I thought it remarkable that patients never asked me to help end their lives (and found it strange that Dr. Kevorkian managed to encounter so many who did). My patients were dying young and felt cheated out of their best years. They did not want immortality, just the chance to live the life span that their peers could expect. What de Grey and other immortalists seem to have lost sight of is that simply living a full life span is a laudable goal. Partial success in extending life might simply extend the years of infirmity and suffering — something that to some degree is already happening in the West.

Think of the people you have known who died too young. Surely, our research dollars should be devoted to helping more of us reach the proverbial three score and ten rather than tilt at the human immortality windmill.

But even if the morbidity problem were solved, it seems to me that immortality would be unwise. It would cheat posterity of its chance on the stage and create a terrible and stultifying cultural inertia that would grind humanity to a reactionary halt. Moreover, as Leon Kass has oft noted, it could rob us of a meaningful life in the time we do have. The author of the book and reviewer agree:

Weiner brings his insightful book to a close with this thought: “The trouble with immortality is endless. The thought of it brings us into contact with problems of time itself — with shapeless problems we have never grasped and may never put into words. Our ability to exist in time may require our being mortal, although we can’t understand that any more than the fish can understand water. What we call the stream of consciousness may depend upon mortality in ways that we can hardly glimpse.”

I think that is right. Just look at the drive in Netherlands to allow euthanasia for elderly people who are healthy but just “tired of life.” I suspect that immortality would profoundly disappoint.

Eggsploitation to Screen at ‘Feminist Flicks’ at 2013 National Organization for Women (NOW) Conference!