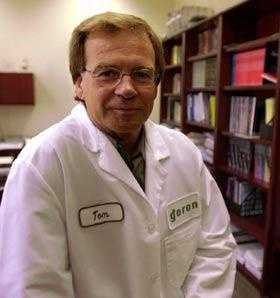 So much for caring exclusively about alleviating the suffering of ill and disabled people. Geron’s head has admitted playing politics with the timing of its request to conduct the world’s first human embryonic stem cell trials on its ESC-based product to be tried on people with acute spinal cord injury–currently suspended over renewed safety cncerns. From the story:

The Bush Administration had been highly obstructive of embryonic stem cell research, imposing a ban on most federal funding of such studies, which Barack Obama had pledged to overturn. Then, just days after President Obama’s inauguration, the FDA suddenly decided that the time was right to give Geron Corporation It certainly looked like more than a coincidence, and the decision was widely interpreted as evidence of a sea change in the US Government’s attitude to stem cell research. But the FDA insisted that the timing was incidental — it had simply ruled on Geron’s application 30 days after it was received, as it was required to do. It now turns out that the timing was more than a coincidence. When I met up with Geron’s chief executive, Tom Okarma, in London this week, he revealed that the announcement was deliberately planned for the immediate aftermath of President Obama’s inauguration. But it was the company, not the FDA, which set this in motion: Geron deliberately timed its application so it would be decided just after President Bush left office, so that the Obama Administration would be able to announce it.

The Times‘ writer mischaracterized the Bush policy, but that point aside, it never ceases to amaze me how obsessed Bush’s opponents were (and remain) with his relatively moderate funding restriction. This much is clear: Okarma has admitted putting political considerations at least co-equal to scientific ones in conducting his company’s business: Why am I not surprised?

Auditioning to Sell Your Eggs