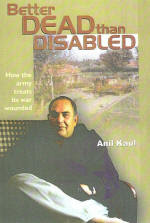 Shades of the Traci Latimer murder from Canada, now a mother in the UK has apparently overdosed her disabled son with pure heroin. And this, after she was out on bail from a previous attempt! From the story:

Ten days after Thomas was admitted to hospital, [Frances] Inglis approached a neighbour and asked her for pure heroin “to end his misery”, the court heard. She later told police she had only said it in a “fit of anger.” Over the following months Thomas’ condition improved so that he could open his eyes and move his limbs. On September 4, Frances Inglis visited the hospital’s High Dependency Unit at 5pm and was left alone with her son. “A nurse later noticed that Thomas Inglis was a strange colour and wasn’t breathing,” said Miss Moore. Thomas was resusciatated but, according to medics, his progress was slowed by the incident.

She was let out on bail, and amazingly, tricked caregivers into allowing her to be alone with her son:

She was charged with attempted murder but was released on bail on the condition she did not see her son. Staff at the nursing home where he was being held were issued with a photograph of her but Thomas was then moved to The Gardens Neurological Nursing Home in Sawbridgeworth, Herts for further treatment. Around lunchtime on November 21, 2008, a visitor signed in as Thomas’ aunt. Shortly afterwards, a nurse went to give Thomas his medication and found Inglis at the foot of his bed. Inglis ushered the nurse out of the room and shut the door, blocking it with an oxygen tank. When staff eventually forced their way in, Inglis allegedly screamed: “Leave him alone you stupid people. Don’t resuscitate him because I have done him already. He is in peace.” When police arrived she allegedly confessed to giving her son injections in his thigh and arms. A search of her home was said to have revealed provisions for what would happen once she was in custody including instructions for caring for the family dog and paying household bills.

The woman was clearly disturbed, but that said, I don’t understand why anyone would be surprised by this. A powerful meme has been loosed on the West that it is better to be dead than seriously disabled, a dangerous belief actively abetted by England’s head prosecutor when he essentially decriminalized assisted suicide of people with seriously disabling conditions by family and relatives.

Oh, you say, “But Thomas didn’t consent!” True, but once the idea that killing is an acceptable answer to human suffering goes mainstream, it is a very small step from allowing assisted suicide to shrugging at the mercy killing of those who can’t consent–for their “own good,” of course. Notice that this kind of thing happens all the time in the Netherlands, with the only difference is that doctors do the killing, and nothing serious is ever done about it.

It will be interesting to see what kind of punishment is meted out in this case. She might not get off easy. First, she badly embarrassed the authorities by allegedly doing the deed after they let her out. On the other, he was profoundly disabled, and the murderers of such people, particularly family members, often receive generous mercy from the courts. But this could be her downfall:

Described by neighbours as a “pillar of the community”, she became a “permanently angry and changed woman” and refused to believe doctors who told her that her son would get better, a court heard.

The murder of people expected to improve is likely, alas, to be treated differently than the killing of someone who aren’t. The potential for improvement undercuts the power of the emotional narrative of ending pointless suffering out of love. I predict little leniency. But it will be well worth watching.