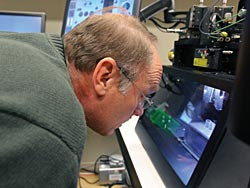 More good news in adult syem cell research – since this is about helping sick people, right?

“Central Texans could soon be among some of the first people in the country to get relief from conditions ranging from diabetes to knee injuries through adult stem cell therapy.

Scott & White health system, in conjunction with the Texas A&M Health Science Center College of Medicine, recently recruited a team of scientists who are conducting pioneering research using stem cells gleaned from adults’ bone marrow. The team’s focus is to bring the benefits of stem cell therapy from the laboratory to patients, said Dr. Darwin J. Prockop, who heads up the group.

Clinical trials involving diabetes patients are scheduled to begin in September, Prockop said. Other trials — including ones addressing heart disease, stroke, osteoporosis, and Parkinson’s and Alzheimer’s diseases — are expected to follow.”

Dr. Hwang is back to work AGAIN

“No Spoon Feeding!” Case to BC Supremes