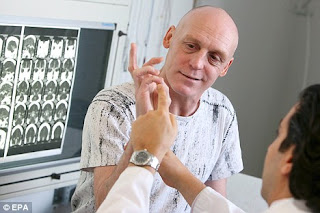 Walt Bast, a 49 year-old mechanic from Germany suffered two strokes and agreed to have this new
surgical procedure where:

“a teabag-like sachet filled with tiny capsules, each containing around a million stem cells.The stem cells, taken from bone marrow, have been genetically engineered to make a drug that protects brain cells from dying.This lets the cells rejuvenate and repair the damage done by the stroke.”

Walt has regained the use of his right arm, damaged from his stroke and also of course, his ability to speak, where he said a week after the surgery, “I feel a lucky guy.”