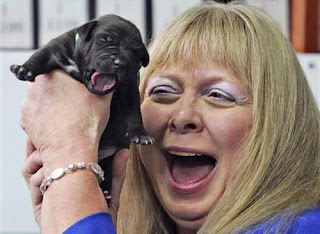 Perhaps you’ve been following the news that the South Koreans have cloned the pit bull Booger? Well five pit bulls have just been cloned from Booger.

And this article raises concerns with egg donation and exploitation in pet cloning. Really!

“The procedure, which costs up to $150,000, is drawing criticism from animal rights groups which oppose cloning pets. They say it can lead to malformed offspring and exploitation of surrogates and egg donors, as well as unfounded claims that the new animal is an exact copy of the original.”

“He said the cloning process also subjects hundreds of dogs and cats to invasive procedures as egg donors and surrogates. According to a report released by The Humane Society in May, 3,656 cloned embryos, 319 egg donors and 214 surrogates were used to produce just five cloned dogs and 11 cloned cats who were able to survive 30 days past birth.”