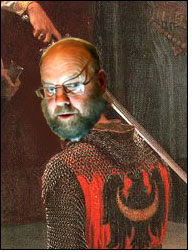 I wrote about this the other day over here, but today there is more ink spilled over Sir Ian Wilmut.

The admission by Sir Ian Wilmut in 2006 that he did not personally create Dolly the sheep set tongues wagging across the world of science. His name had been synonymous with the breakthrough that led to the first clone from an adult mammal, but he made clear that his role was a supervisory one.

So when Sir Ian was knighted at New Year for “services to science”, controversy was to be expected.

The latest rumblings have come in the form of a petition to the Queen requesting that his knighthood be revoked. It is signed by four former employees of the Roslin Institute, where Dolly was created in 1997.” full story here in today’s Times Higher Education.

Do you think the Queen will reconsider?

Wait a Minute to Cloning Patent Down Under

Conversation With a Fertility Representative