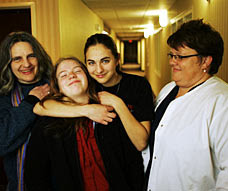 I’ve read the stories about the kids walking around the streets with T-shirts pronouncing, “My dad is donor #7. Who’s your dad?”. This article in the Daily Mail tells JoEllen’s story. She has two moms, a sperm donor dad, a half-sister from another sperm donor and 10 half-brothers and sisters, “she recently discovered”. One wonders how many other half siblings she may have out there.

Of course this new way of family building raises all kinds of social and ethical questions. One organization, Donor Sibling Registry, “seeks to assist individuals conceived as a result of sperm, egg or embryo donation who are seeking to make mutually desired contact with others with whom they share genetic ties.”

Oh the genetic ties that bind us!

Breeders in NY and DC