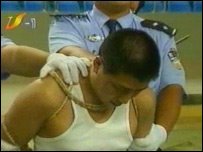 Organ sales are brisk with organs taken from executed prisoners in China. And with executions on the rise, officials say there is a surplus. China leads the world in prison executions. And some would add, human rights violations.

Qin Gang, Foreign ministry spokesman stated, “It is complete fabrication ….to say that China forcibly takes organs from people given the death penalty for the purpose of transplanting them.” Others say it is the prisoners “present to society”.

Human Cloning Continues around the world