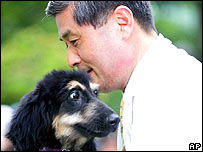 “Being too focused on scientific development, I may not have seen all the ethical issues related to my research.

“We needed a lot of ova [eggs] for the research but there were not enough ova around,” Dr Hwang said, explaining why standards may have slipped. The research conducted by his team requires large numbers of human eggs, which are difficult to obtain.

Hmmmm, large number of human eggs? Which are difficult to obtain? So all along, one of the moral objections to mass producing cloned embryos for stem cell research has been this problem with needing women in large numbers to come forward and donate their eggs to make human clones. And now the prominent embryo cloning researcher (remember, he’s the guy who first cloned a human being–and they said it could never be done!) has said in his zeal for scientific development he forgot about the ethics. Oh my. Do you think in America’s zeal to be first in science, remember Irv Weissman at Stanford is complaining that we are losing our best talent to Singapore and Singapore may beat America and be first to find cures and get patents on embryo research, we may turn a blind eye to what is right? Well if you’ve been following the prop. 71 fall-out in California you will hear a large sucking sound and smell a pretty bad stink!

The photo is with Dr. Hwang and the dog he cloned, Snuppy!

We Are Reaching More Than 1,000 People Per Hour Right Now